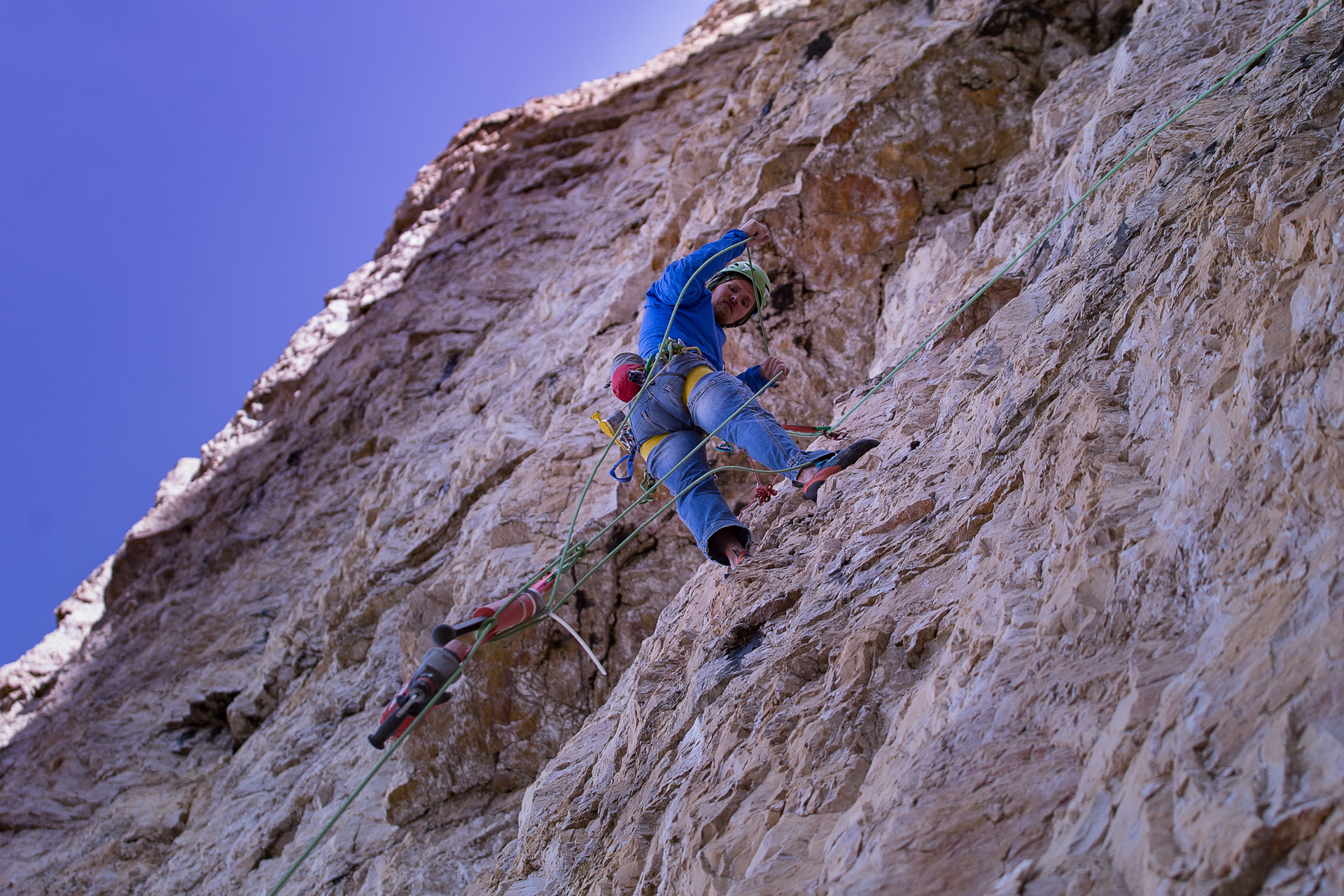 After completing the Alpine Trilogy, sending their first big wall climb ever and confirming their skills by making the ascents of challenging Pan Aroma and Spanish Route Jacek Matuszek and Łukasz Dudek decided to reach out for their biggest dream. We talked about the tedious, nerve wracking but also truly rewarding process of establishing a new multi-pitch route in the mountains.

It’s easy to guess neither of us had any clue as to opening new routes. We devoted the past seasons to getting used to the nature of alpine climbing, gaining experience and ticking the goals off our list. The more confident we grew about our abilities, the more seriously we thought about our next adventure. We started asking ourselves about things we’d never ever experienced in climbing, or rather in the mountains. We had climbed a number of sport and trad routes and we knew what it meant to deal with extremely chossy rock, razor sharp edges and solid slabs. We’d experienced cold, rain, hail and storm; being exhausted in the dark, hunger and thirst, heat and scorching rays of the sun; failure and victory; giving up and pushing through. There had been moments of self-doubt and we’d felt like giving up on climbing more than once but somehow we had always found strength to carry on. But never had we tasted the emotions related to the process of opening a new route. And suddenly our plan was clear: we decided we wanted to find our own line in the Dolomites, our beloved place that embodies our childhood dreams of rugged ridges, long valleys tucked between massive slopes, rough mountainous landscape giving you goosebumps. We pictured the route as being difficult but at the same time logical and located on a nice, exposed wall offering solid, good quality rock. Easy. In theory at least. 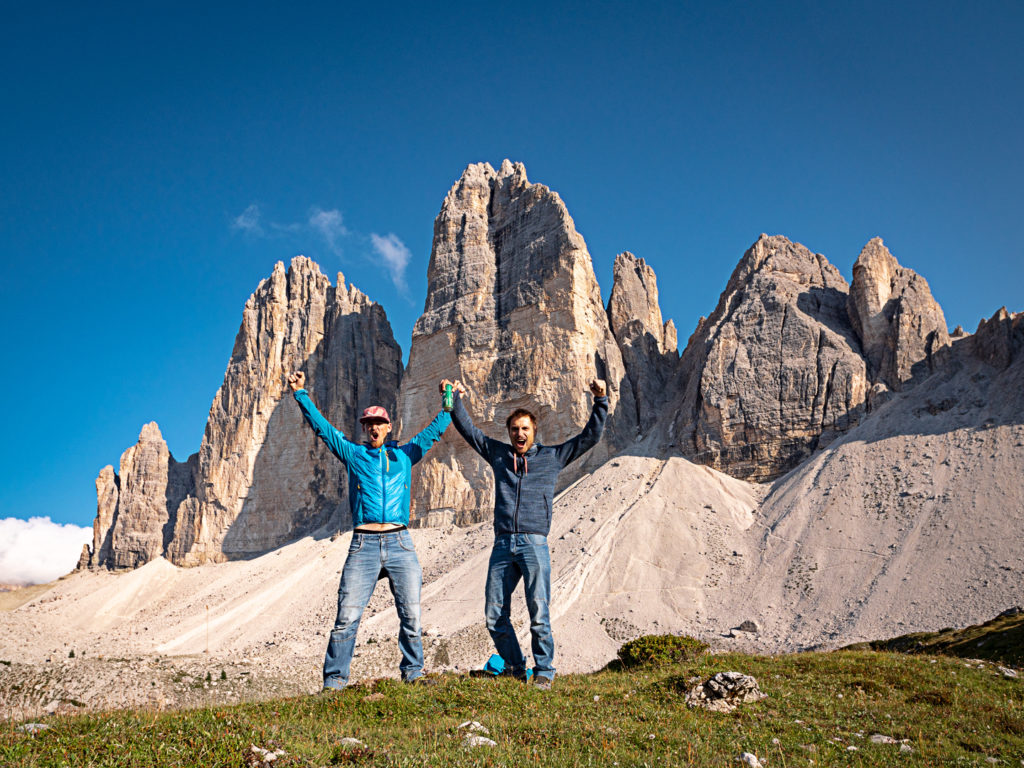 To be honest, we didn’t even know where to begin. We kicked off with our search in Ombretta Valley situated at the foot of the south face of the Marmolada. As it turned out, the potential lines we’d spotted were already taken meaning loaded with fixed ropes. But there was Piz Serauta watching us from our right hand side together with a distinctive 200 meter tall, incredibly looking flake. Our imagination ran wild and we could almost see the following pitches of the route, long moves on good jugs on rock resembling French Céüse, Frankenjura-like sections on vicious crimps and pockets putting finger strength to the test. As we approached the wall we realized the rock was just perfect… so perfect and so compact that you could barely spot any features. We kept on searching. Following Hansjörg Auer’s recommendation, we decided to check Taè Pic out located in the picturesque valley near Cortina d’Ampezzo. The place was idyllic and so was the climbing. Easy slab scrambling around VI grade led us to one or two final hard pitches. It was not what we’d been looking for, completely not our style. That experience made us even more confident. We were discussing various possibilities and agreed that our line needed to offer 400 meters of sustained difficulties from start to finish with the crux section located somewhere in the three quarters of the route. It needed to be logical, leading along outstanding rock formations. Flicking through the pages of the Tre Cime guidebook for the umpteenth time Łukasz’s attention was drawn by La Strada, the route on the right side of Cima Grande. Interestingly, it was the Polish duo of Fijałkowski and Edelman that first aided the route back in 1980 but no team managed to free climb it ever since. Thus, making the first free ascent seemed like an excellent idea to us. Determined and full of energy, we were studying the tough relationship between Gelsomina and Zampanò, the protagonists of “La Strada” by Federico Fellini and started setting our minds on an interesting adventure. But a second after we’d made it to the foot of the wall, the feeling of discouragement was back. The initial 100 meters of the route turned out to be permanently soaking wet and climbing on wet streaks was the last thing we longed for. However, to the right of it there was a solid vertical face with a massive buttress in the central part of the wall. There it was, the solution to the puzzle, right in front of us. 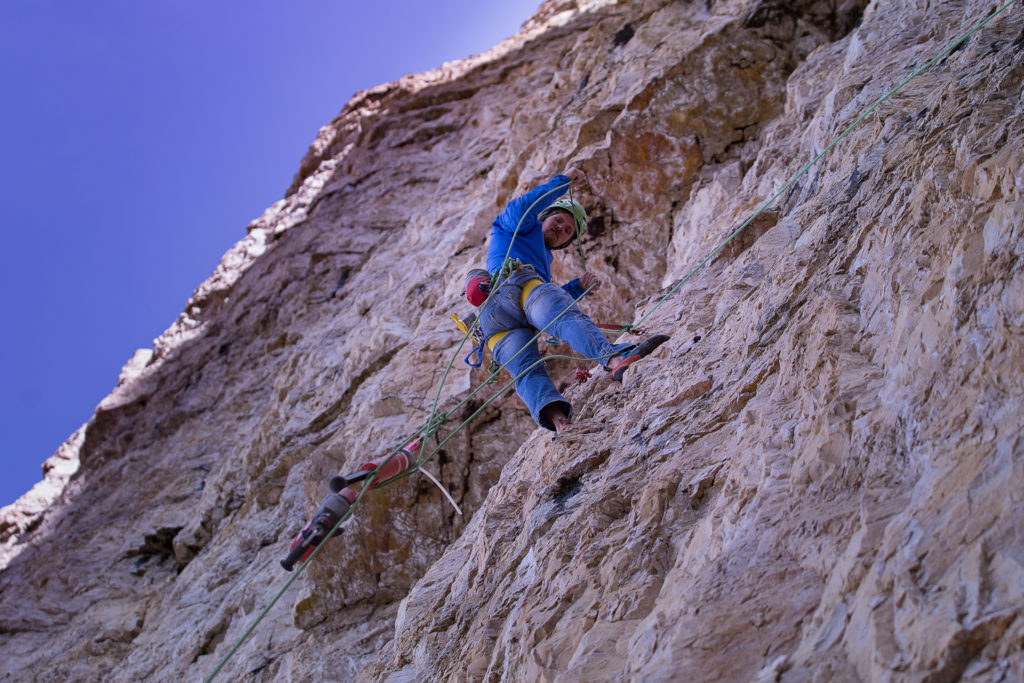 We pulled out all of our toys from our backpacks and Jacek started racking up some bolts, pitons and cams on his harness. Looking like a proper Christmas tree he cruised his way up the first easy part and reached the slab. For the first time in his life Jacek put his trust in a skyhook and after some drilling the first bolt was proudly shining on the wall. Having aided the rest of the pitch using friends, he finally got to a comfy ledge, where he installed a belay. Now it was my turn. Before entering the virgin terrain I carefully examined the skyhooks and tried them out for the first time ever. It was August 2017, exceptionally cold one, with temperatures on the wall not exceeding 10°C. We climbed in the shade most of the time, which made it even harder to warm up our hands and fingers. The process of opening a route drags on forever, especially if you have never done it before. You basically rip away every meter, every centimeter of the climb and progress is inevitably slow. Referring to our climbing pace as a snail’s one would be so unfair to this animal. On the other hand, the emotions you feel while hooking just sweep you off your feet. The mixture of adrenaline, focus and composure can be compared to the state you’re usually in before sending your hardest projects. Fixing the protection point and clipping the rope make you feel elated, euphoric as if you’ve just done the entire route or won the 30-meter on sight battle of a lifetime. You want to scream at the top of your lungs, it feels so good. All these small successful steps forward slowly bring you closer to the great finale and this was exactly how we clawed our way up the whole route. We swapped leads to speed the work up as much as possible but the rock did not ease off. Finally, we got past a challenging traverse section, after which there is no way to turn back without any fixed ropes and we climbed up the beautiful exposed buttress offering the moves comparable to the best climbs we know. Over the summer of 2017 we established six pitches leading to less demanding terrain. We hoped that it would be easier to resume our work from there and climb the rest of the route in the following season. Shortly after we’d finished our trip the snowy weather rolled in and we started counting the days till the onset of the next season. 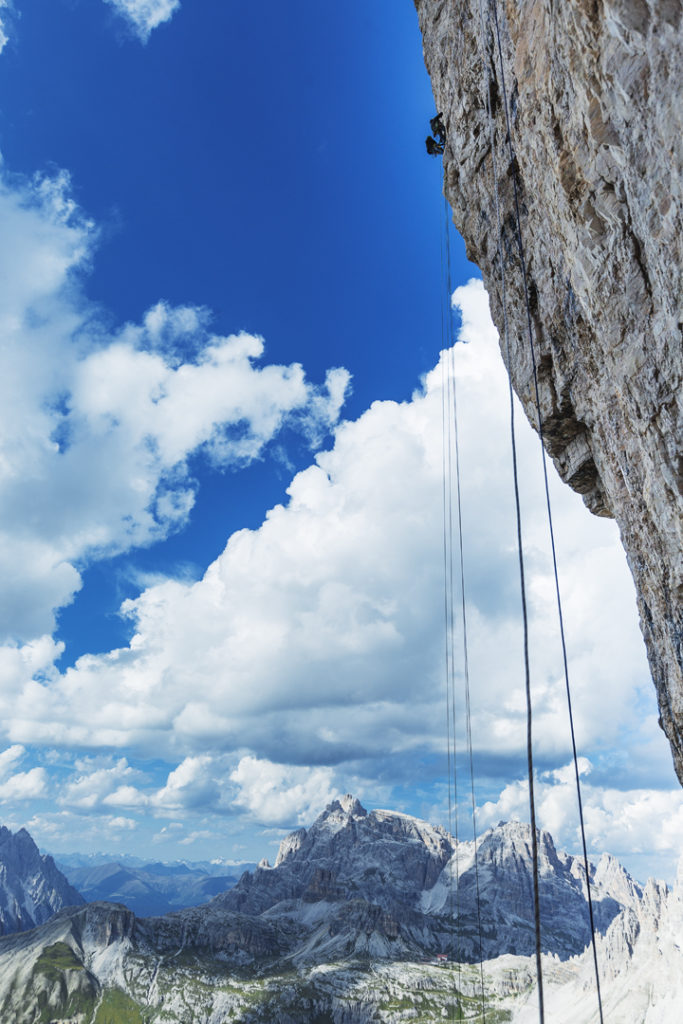 Last summer we were back at the foot of the wall. We managed to complete the route by establishing the next six pitches. For protection we used mostly bolts, pitons and cams and climbed mostly on vertical faces typically offering well featured rock. Lack of evident rock formations that usually help preplan and scrutinize the following meters made it extremely difficult to find the right line across the sea of rock. We stuck to the easiest and the most solid terrain and after finishing a pitch we used to install fixed ropes so that we could move along the route more efficiently and easily pick up where we’d left off the other day. Eventually, the only thing left for us to do was to make the first free ascent. That got longer than expected due to heavy rain that got us in the middle of the climb. The weather did not improve until late in the evening but fortunately it is exactly in the middle of the route where the aforementioned wide ledge is located so we could enjoy our layover in decent conditions and then we resumed our climb for the final push. Late at night we reached the end of the route – our very first one, opened ground up. In the log book we wrote that we would announce its name at a later date. We’d had Premiere in the back of our minds for some time now but still needed a while to take that decision. The line might not be the hardest one on Tre Cime but it is definitely a challenge, both physically and mentally. Premiere starts to the right of La Strada and climbs directly upwards onto the buttress and then follows its arête. Then it reaches the good bivy ledge in the middle, from where it dives into the biggest overhang right above it and then runs to the left towards the edge to finally lead the climbers to the easy terrain below the summit. The route consists of many pitches around 7b grade requiring both solid endurance and nerves of steel. Also, after a long and exposed traverse section on the 5th pitch there is no possibility to turn back without leaving a fixed rope. This inconvenience is however counterbalanced by the above mentioned ledge two pitches higher up that allows for a moderately comfortable overnight stay.

We must admit that the processes of making ascents of already existing routes and opening new ones are worlds apart. Establishing a route equals gruesome slog involving a lot of pure strenuous physical effort and not so much climbing and to us it seemed more like rope access work rather than cruising up the wall. Moreover, the process is super heavy on your mind. Most of the times we called it a day not because we were tired physically but because there was no mental strength left in the tank. Nonetheless, being able to make your own decisions and accept the responsibility is way more interesting than following in someone else’s footsteps. Paving the way through the unknown is accompanied by excitement about whether climbing here is even possible. It is about believing in yourself and a long process of creation interwoven with feelings of self-doubt and question marks, everything wrapped in fear. While attempting a route, even if ludicrously difficult, the awareness of it having been done before makes the whole difference in the world. It makes you feel a step ahead because you know it can be done. Nevertheless, after many days up the wall we managed to leave our trace on Cima Grande and now it is certain – we were there first, before anyone else. The antecedence changes everything. Premiere is ready and looking forward to being repeated – we encourage all of you to pay it a visit!